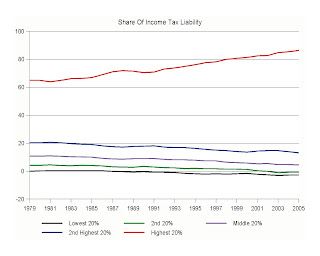 Over the course of this presidential election season there has been quite a bit of discussion of income taxation. As you can see from my blog post just before this one, Senators McCain and Obama have policy positions with respect to income taxation that are considerably different.

One of the tax themes that I don't like to hear is that the federal government should more heavily tax the wealthy. This theme goes along with the assertion that recent efforts to decrease federal income taxes have been to the benefit of the wealthy. What are the facts in this regard?

The two charts I provide here summarize data reported by the Congressional Budget Office. Each chart shows tax shares by income quintiles for all households.

Of course, the federal government has other sources of tax revenue that are not reflected in the chart above. Notably, the payroll or social security tax is excluded from the chart above. The chart just below shows the tax shares for all federal tax liabilities, including the payroll tax. 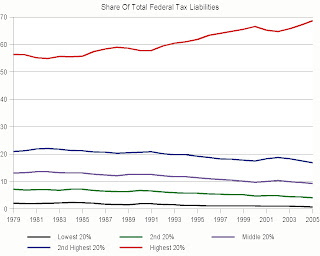 The distribution of the burden of financing federal government also may weaken our republican form of government. Look again at the chart at the top of this post. The bottom 40% of households by income pay a negative share of the income tax, i.e., people in these income quintiles receive payments. Doesn't this set up a bad set of incentives with respect to public policy, especially with respect to government taxation?

When I teach public choice to my undergraduate students we rely heavily on the median voter model. The charts above suggest we may be pretty close with the federal income tax to a situation in which the median voter is actually a person who has no federal income tax liability and who may actually receive payments from the federal government. If such a situation was the case then it would seem that the lower income households could see incentives to vote for politicians who would seek to help them take from the political minority.

Maybe we are closer to this situation than I think. After all, there are politicians campaigning, and it seems even leading in the political polls, who showcase their tax policy as making the wealthy pay more, as though the wealthy weren't already paying the largest share. After all, there are even politicians who say they favor redistributing the wealth. Is it now the situation in this country that the median voter prefers such politicians because it is expected he or she will be rewarded for supporting such politicians with more of the income and the wealth of others?

Or, is this stretching the history of the past 1/4 century a bit too far?

At least we economists should be able to offer another bit of insight into the present situation. For efficiency, we know that the benefit principle should be met. That is, for an efficient allocation of resources, each individual should pay an amount equal to their personal benefit at the margin for the goods and services provided by government. It seems likely that the charts presented above suggest we are quite a distance from the benefit principle in federal government taxation, and thus we are quite a distance into a government revenue and expenditure system which results in an inefficient allocation of resources.

One final observation. The politicians who have chosen the policy position of more taxes for the wealthy, are often (maybe mostly?) members of Congress. The data charted above are produced periodically by the CONGRESSIONAL BUDGET OFFICE. I think this means we can safely assume that the politicians saying "more taxes for the wealthy" aren't saying this because they haven't had the data at their fingertips.
Posted by Larry Eubanks at 10:26 AM

Yes, but showing only federal income tax does not show reality. The reality is that lower income folks are hit hard by FICA taxes. I would love to see a chart of total tax burden as a percentage of income by quintile. If a chart showed total tax burden, including federal income taxes, FICA taxes, all state taxes (including estimates of sales tax), this chart would look dramatically different. There is a reason that Warren Buffet says that his secretary pays a greater percentage of her income towards taxes than he does. Because it's true.

That doesn't change the bottom line which is: the lower income folks are getting money back. They have a negative tax contribution.

To really be fair, this should be subtracted from the figures and would be even more lopsided.

Hello !.
might , probably curious to know how one can reach 2000 per day of income .
There is no need to invest much at first. You may commense to get income with as small sum of money as 20-100 dollars.

AimTrust is what you haven`t ever dreamt of such a chance to become rich
The company represents an offshore structure with advanced asset management technologies in production and delivery of pipes for oil and gas.

Its head office is in Panama with affiliates everywhere: In USA, Canada, Cyprus.
Do you want to become an affluent person?
That`s your choice That`s what you desire!

I feel good, I started to get income with the help of this company,
and I invite you to do the same. If it gets down to select a proper partner utilizes your funds in a right way - that`s the AimTrust!.
I earn US$2,000 per day, and my first deposit was 1 grand only!
It`s easy to get involved , just click this link http://natidonywi.1accesshost.com/fegufi.html
and go! Let`s take our chance together to feel the smell of real money