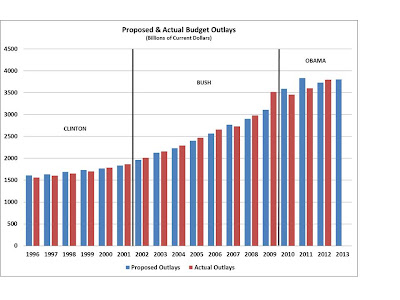 Recently President Obama drew attention to Presidents and their budgets with the following comments:


"I'm running to pay down our debt in a way that's balanced and responsible.  After inheriting a $1 trillion deficit, I signed $2 trillion of spending cuts into law," he told a crowd of donors at the Hyatt Regency. . . . "I just point out it always goes up least under Democratic presidents.  This other side, I don't know how they've been bamboozling folks into thinking that they are the responsible, fiscally-disciplined party. They run up these wild debts and then when we take over, we've got to clean it up."

The President was apparently relying on an analysis by Rex Nutting to support his comments.

I decided to take a look at the US budget for myself.  I suggest we can get a reasonably good idea about the President's assertions without all the detailed assumptions and calculations of Mr. Nutting.  I think the charts presented above and below are most useful in this regard.

President Obama's budget proposal for the 2013 fiscal year was made public on February 13, 2012.  The 2013 fiscal year begins in October 2012, and Congress is statutorily required to pass a budget by April 15 prior to the start of the new fiscal year.  Of course, budget or not, Congress and the President still spend money.

Since the President proposes and Congress chooses, subject of course to the President's veto pen, I think it is interesting to compare the President's annual proposal for spending with the amount actually spent.  I am interested in making comparisons between proposed and actual spending across as many Presidents as I can by using data available online.  Unfortunately, the information I was able to find online only went back as far as President Clinton's last six budgets.  What I found is presented in the charts above and below. Click on either chart to get a larger version to look at.  The information in these charts comes from Table 1-3 in the Historical Tables for each budget year.  Note that the number for actual FY 2012 spending is still an estimate in the Historical Tables.

Notice that the President's proposed outlays are never the same as the actual outlays, and that for most years proposed and actual do not seem very far apart.  It also seems that actual outlays were roughly flat for the first four years of the Clinton presidency presented in this chart, and that for the last two years of Clinton's presidency, and certainly by the Bush presidency, Congress and the President were choosing to spend at a quicker pace over time.

Notice also that for FY 2009 the actual outlays are significantly greater than the spending proposed in February 2008 by President Bush.  In addition, note that President Obama's first two budget spending proposals were significantly greater than the actual spending in FY 2010 and FY 2011.  Perhaps President Obama has signed $2 trillion of budget cuts into law, but given the size of his proposed budgets for FY 2010 and FY 2011 it seems to me likely that these budget cuts were chosen by Congress and not by the President.

Consider the chart presented below which shows each President's proposed budget deficit versus the actual budget deficit.  The first thing I notice is that there are four years of actual deficits that are above the zero line which means there are four years of actual budget surplus shown in the chart.  Each of these budget surpluses happened during the Clinton Presidency.

Of course the most obvious aspect of the proposed versus actual deficits chart is that from FY 2009 on the size of the government's deficit has been very large compared with any of the earlier years.  President Obama asserted: "They run up these wild debts and then when we take over, we've got to clean it up."  There are some "wild" deficits shown in the chart, but they are found within the Obama years, and it seems to me that as late as February of this year, there has been no budget proposal that fits with the idea of cleaning any of it up. 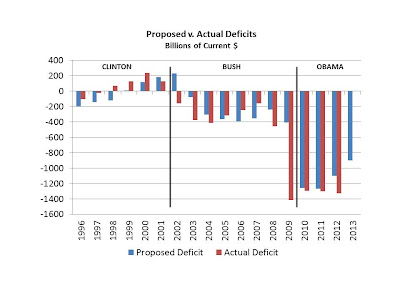 Email ThisBlogThis!Share to TwitterShare to FacebookShare to Pinterest
Labels: Budgets

I would like to thank you for the efforts you have made in writing this article
nice post, that's very interesting information thanks for sharing :)
I introduce a Economics student in Islamic University of Indonesia Yogyakarta