There is an interesting commentary in the Wall Street Journal about Congressional budget earmarks. Congress has just passed a spending bill that is supposed to contain almost 9,000 earmarks. However, most of those earmarks aren't actually written into the bill that passed. Instead, the earmarks are found in the 500 page committee report. The interesting part of this is that:

A December 18 legal analysis by attorney Todd Tatelman for the Congressional Research Service concludes that "because the language of committee reports do not meet the procedural requirements of Article I of the Constitution -- specifically, bicameralism and presentment -- they are not laws and, therefore, are not legally binding on executive agencies." In plainer English, this means committee reports have not been formally passed by both houses and "presented" to the President for signing.

So, the President can sign the spending bill, but since the earmarks aren't actually in the bill he is not constitutionally required to spend on the earmark projects.

In a way, this exposes just how corrupt Congress is these days. Congressional leadership allows individual members of Congress to pick projects that spend dollars taxed from us for the benefit of friends, family, and contributors, and the means of doing this is to hide the projects from public view and probably even the view of other members of Congress. But in doing things this way Congress seems to be acting outside the Constitution. If the President chooses to actually spend on the earmarked projects, then it appears to me that the President will become a participant in the corrupt acts of Congress, and that the President will also be acting outside the bounds of our Constitution. If both the Legislative and Executive branches of government seek to exercise power outside Constitutional bounds, then doesn't this suggest that our government may be unjust as well as corrupt?
Posted by Larry Eubanks at 5:47 AM No comments:

In the Wall Street Journal today:

Even worse is the President's abdication on earmarks, or Member-requested pork. Mr. Bush had publicly insisted that Congress should cut the number of earmarks by 50% this year, from 13,492 in fiscal 2007. Ah, not quite. The "omnibus" includes 8,983 earmarks, and counting, which brings the total so far to 11,144 including those passed as part of the Defense bill. As a percentage decline that is only 17%.

The pork barrel includes $700 million for a Minnesota bike trail, $113,000 for rodent control in Alaska, and $1 million for an energy project in the district of Lousiana Democrat William Jefferson, who faces trial for bribery next year. Dozens of these earmarks were "air-dropped" into the bill at the last minute, meaning that fiscal conservative Members lacked the time to find and fight them on the House or Senate floor.

Peter Boettke has a very interesting post on pluralism:

One of our loyal and precocious readers has repeatedly asked for debate and contending theoretical perspectives. I agree that an intellectual openness to alternative methods and theoretical perspectives would be healthy for the economics profession. But I have always found the demand for pluralism to be completely inappropriate at the level of the individual.

At the level of the individual scientist, in their work as scientists, they have to commit themselves to an approach and pursue it doggedly even in the face of great doubt and resistence by one's peers. Think of scholars in economics such as Jim Buchanan with public choice and rational choice political philosophy, or Hayek on the epistemic turn required in economics and political economy, or Vernon Smith and experimental economics. One could also think of Paul Samuelson and mathematical economics. All paradigmatic shifts in science are a result of the dogged commitment of individual scholars to a particular perspective methodologically and theoretically. As Michael Polanyi points out in Personal Knowledge, science progresses through commitment by individual scholars and the contentious play between differently committed scholars in the 'republic of science'.

So pluralism is a by-product, not a cause of scientific progress.

Read the whole thing.
Posted by Larry Eubanks at 7:24 AM No comments:

The True Liberal Is Cosmopolitan

So when asked what alternative vision of the political future I hold than that offered by the contemporary landscape it is this --- Misesian liberalism. That we don't seem to be on a path to achieving that is a source of frustration for me. I am not whining as one of our readers suggested, I am stating a fact.

Liberalism in the hands of Mises was the "progressive" form of libertarianism that Horwitz talked about. Read Mises's Liberalism, it is a doctrine of freedom and toleration; of free trade and free thought; of free mobility of capital and labor internationally as well as domestically. A world of private property and freedom of association and contract, is a world of toleration of 'experiments in living' and entrepreneurship. The terminology of "left" and "right" is not appropriate for this, but the terms cosmopolitan and parochial may be.

Mises argued that the true liberal is a cosmopolitan. And, it is that sort of vision of the liberal argument that one can find in contemporary works in political economy and political philosophy such as Rothbard's For a New Liberty, Lavoie's National Economic Planning: What is Left?, Lomasky's Persons, Rights and Community, and Kukathus's The Liberal Archipelago.

Posted by Larry Eubanks at 7:10 AM No comments: 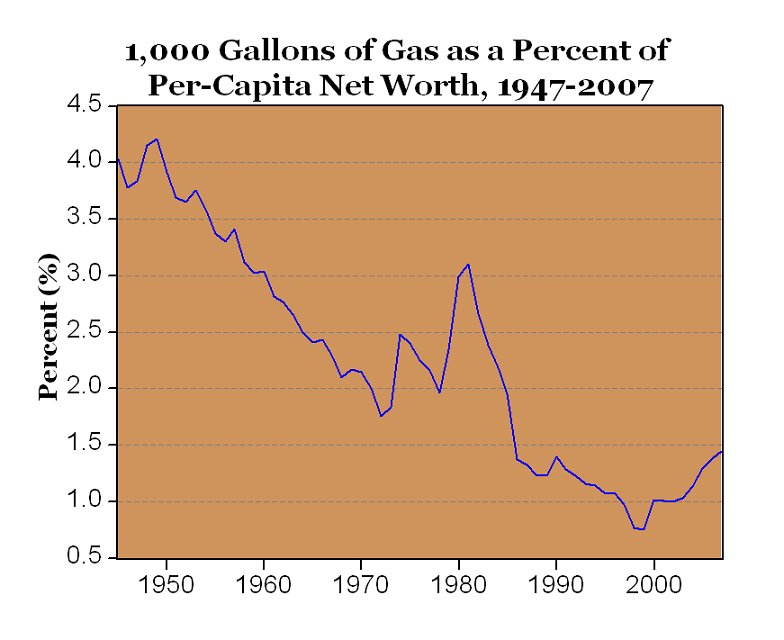 To be as expensive as gas in 1981, measured as the cost per 1,000 gallons as a share of per-capita net worth, gasoline today would have to sell for about $6.50 per gallon.

Bottom Line: Gas today, even at $3, is relatively affordable and is actually cheaper than the decades of the 1940s, 1950s, 1960, 1970s and 1980s, when the price of gas is measured relative to our increasing household wealth.

Posted by Larry Eubanks at 6:57 AM No comments:

Land Of The Free

The House overwhelmingly passed a bill that puts a huge onus on individuals and ISPs to report a broad range of images or face $150,000 or $300,000 fines: The bill, if passed, would require anyone offering network access (under a broad definition) to report any images they come across that covers a broad range of potential depictions of abuse of minors or their exploitation. Declan McCullagh notes in his post at Cnet that it’s so broad as to include photographs, drawings, and cartoons that require interpretation as to whether they would meet the test. Sounds like viewing an Abercrombie and Fitch catalog could qualify.

From McCullagh’s report, it’s clear that if you operate, for instance, an open Wi-Fi network from your home, you’re not obliged to monitor other people’s uses of it. However, if you were in any fashion to become aware of behavior circumscribed in this law, you could be fined $150,000 on a first offense and $300,000 on a subsequent one—unless you preemptively report, in which case you’re immune to lawsuits and prosecution. Which means people are going to report a lot more or shut down otherwise free hotspots.

Reporting requires that you provide the images that you saw, which obviously opens people up to charges themselves unless everything is handled extremely carefully as possession of child pornography is a de facto crime that allows for no explanation in much of the U.S.

The change in demands from the left shows that we won militarily. Democracy is more difficult to deliver. It takes time and patience. Let us review:

In 1999, Nato troops and U.S. bombers led a 78-day war in Kosovo to rid the region of a brutal dictator, Slobodan Milosevic. 8 years later, talks continue on a final resolution of its status. Russia has threatened to use it UN veto to nix any deal that does not suit Vladimir Putin, who wants to resurrect the Soviet empire.

In Korea, the 3-year war between North and South ended in a cease-fire in 1953. The corrupt government of Syngman Rhee ended in student riots in 1960. A year later, General Park Chung-hee led a military coup and held power until 1979. This gave way to Choi Gyu Ha’s government, followed by a military coup a year later. Direct elections came about in 1989.

In Italy, a black market flourished but the 1st Republic was installed in 1948, roughly 3 years after its liberation. Its first election was marked by violence and U.S. efforts to keep communists from winning — and by Stalin’s efforts to buy the election. Southern West Virginians and Cook County Democrats run clean elections by comparison.

In France, the 4th Republic was installed after the war. It went through 21 changes in prime ministers in 11 years. The 5th Republic came about in 1958.

In Japan, Gen. MacArthur ruled the nation for 7 years. In 1952, its democracy was established.

Now then, 60 years after the war, troops remain in Italy, Japan and Germany, which took 45 years to re-unite.

109 years after the Spanish-American War, U.S. troops are in the Philippines. They left momentarily in World War II, ousted by the Japanese. [Oops. A critic points out our bases closed in the Philippines a decade ago. OK, 100 years instead of 109.]

In none of these nations would anyone suggest that there has been a war. That’s because with the exception of an occasional Baader-Meinhof gang, no one is taking potshots at our soldiers.

Those wars have ended. This one will end soon, when U.S. Army casualties reach zero.

That does not mean there will not be political violence and acts of terrorism.

Posted by Larry Eubanks at 5:51 AM No comments: