Economic History of the World 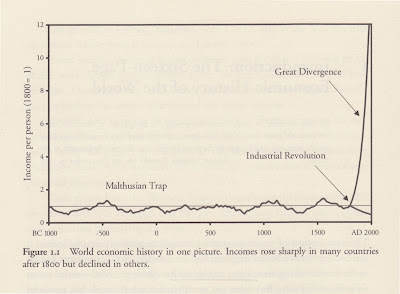 Here we have the economic history of the world in one picture, as summarized for us by Gregory Clark in A Farewell to Alms:


The basic outline of world economic history is surprisingly simple. . . . Before 1800 income per person--the food, clothing, heat, light, and housing available per head--varied across societies and epochs. . . . the average person in the world in 1800 was no better off than the average person of 100,000 BC.  Indeed in 1800 the bulk of the world's population was poorer than their remote ancestors. . . . Life expectancy was no higher in 1800 than for hunter-gatherers: thirty to thirty-five years. . . . average welfare, if anything, declined from the Stone Age to 1800.  The poor of 1800, those who lived by their unskilled labor alone, would have been better off if transferred to a hunter-gatherer band.  The Industrial Revolution, a mere two hundred years ago, changed forever the possibilities of material consumption.  Incomes per person began to undergo sustained growth in a favored group of countries.  The richest modern economies are now ten to twenty times wealthier than the 1800 average.  Moreover the biggest beneficiary of the Industrial Revolution has so far been the unskilled.  There have been benefits aplenty for the typically wealthy owners of land or capital, and for the educated. But industrialized economies saved their best gifts for the poorest. [Introduction, pp. 1-3]

In other words, for most of human history and in most places in the world, almost all people lived very near subsistence.  But, something happened around 1800 in some places, and the masses of people in those places began to break away from subsistence living and to prosper.

This is the Great Fact of history, as Deirdre McCloskey refers to it in Bourgeois Dignity.  This Great Fact seems to be something most people are unaware of, even among the people who are living in those places in the world where most people live far from subsistence.  It is a fact which seems to be missing from the curricula materials in our schools.  It even seems that this missing fact contributes to many people taking our own prospering for granted.  So, I suppose it should be no surprise that many people seem to believe ideas that are inconsistent with the explanation for why, in some parts of the world, the masses of people began to prosper and continue to prosper today.

What explains the Great Fact of history?  I was reminded of this question earlier this morning while finishing Hayek's The Political Order of a Free People:


However little it may often appear to be true, the social world is governed in the long run by certain moral principles on which the people at large believe.  The only moral principle which has ever made the growth of an advanced civilization possible was the principle of individual freedom, which means that the individual is guided in his decisions by rules of just conduct and not by specific commands.  No principles of collective conduct which bind the individual can exist in a society of free men.  What we have achieved we owe to securing the individuals the chance of creating for themselves a protected domain (their 'property') within which they can use their abilities for their own purposes. [pp. 151-152]

There are lots of specific details we might pay attention to in answering this question, but the simple bottom line seems to me just what Hayek writes here, i.e., individual liberty.  Unfortunately, our system of political economy today seems to move farther and farther away from a society of a free people.
Posted by Larry Eubanks at 11:50 AM

Great post. I hope my generation will become my aware of this fact.

That graph is incredible and liberty is truly the key. The results are clear: the market increases the standard of living for the poor much better than any other system - this is absolutely beyond dispute.

So why do some people decry the market and capitalism? They try to say that the market benefits the rich at the expense of the poor. As the graph illustrates, nothing could be further from the truth.

In reality, the elite started demonizing the market once they saw that it was working for the poor man. A man with economic freedom is impossible to control.

The elites feared losing the control they had over the common people. And it continues to this day. People that hate the market are either willfully ignorant or they hate equality of liberty.