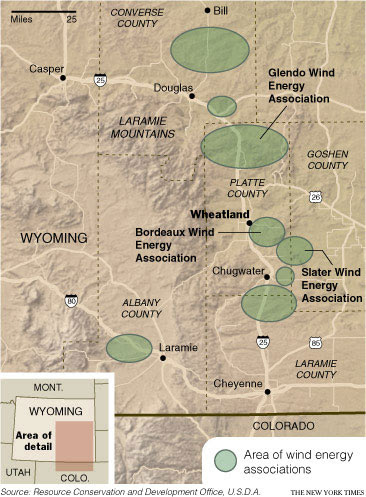 There is an article in the NY Times that tells of an interesting application of Mancur Olson's Logic of Collective Action. Ranchers in Wyoming are forming wind energy associations. Here is an explanation of the incentives for these new associations:

Mr. Stumbough felt the ranchers were at a disadvantage when dealing individually with wind developers. The developers, in most cases, know more than landowners about the value of the wind and the transmission lines that will carry it.

"Mr. Stumbough said: “I thought we could use collective bargaining strategies to maybe have a little more leverage in negotiating with wind developers. If we could all get together and work together cooperatively and do some cost sharing and maybe share some of the profits, I think it’s going to be a benefit to everybody.”"

Cost and profit sharing represents collective goods for the associations.

Note also the information problem suggested in the first paragraph. This reminds me of Hayek's The Use of Knowledge in Society. The individual landowners face a personal knowledge problem of wanting to discover the value of leasing their property for wind energy production. The associations are voluntary means of dealing with this problem. The relative values of resources in different uses are also emerging in prices for leases as well as prices for the electicity produced by wind turbines.

There are a couple of things in the story that concern me from the perspective of economic understanding or economic literacy. One is the caption under one of the photos:

Strong winds in southeastern Wyoming have forced landowners together to improve bargaining position.

Nothing, and especially not strong winds, have FORCED Wyoming landowners to form these associations. These are voluntary associations; not forced associations (i.e., they are not organizations such as unions are).

The second is the implied suggestion there is something wrong with secret deals:

That has made it easier for wind developers to make individual deals and insist that the terms be kept secret. The developers’ cause has not been hurt by a 10-year drought’s impact on agricultural families’ finances.

I would think there would be something wrong in secret deals if they involved force, but surely a landowner and an energy company can ethically make a voluntary agreement that includes secrets as long as no harm is done to the person or property of others.

You can learn about some of the specifics involved in forming the Slater Wind Energy Association here.

If you've read Olson's Logic, perhaps you would comment on the way in which the number of members is related to the formation of these associatons.
Posted by Larry Eubanks at 8:34 AM

It's been a while since I read Olson, but as I recall the kicker IS the number of members: The less people, the more likely the group is to form. Specifically, the problem with collective action is one of free riders. A member of a group of 1 million, for example, knows his actions cannot contribute anything, essentially, to group success, so if there are no exclusive incentives (or, benefits only for group members that alone might make membership worthwhile), he will not participate but just sit back and get whatever benefits accrue from others' actions. If there are only ten members, however, one member's participation has a significant effect, and this coupled with peer pressure being more likely in small groups makes it more likely he will participate.

I'd be interested to see how many ranchers are being tapped for this, and if the organization offers anything exclusive, like some sort of insurance protection.